Welcome to the website of Mike Rekers (1968). On this website I give you an overview of my free work.

The ongoing wavelength photo-installation arises from the photographing of details, constellations of objects, shapes, patterns, situations and places in everyday reality that evoke a moment of wonder, connection or alienation in me. Images to which I can connect a certain thought, idea or inner state of being.

My work area extends from the immediate domestic outdoor environment to urban fringes and less inhabited outdoor areas where the layout of the living environment is less orderly and the way of life becomes more autonomous. These fringes often present a fascinating variety of casual, inemphatic scenes and seemingly insignificant traces of human presence that can suddenly become meaningful within a photographic ‘zoom in’ and framing.

I research these environments with an attentive, open-minded look and without a preconceived idea of what I want to photograph. While walking and exploring I intuitively photograph everything that stirs me emotionally, intellectually, aesthetically or evokes my musical imagination.

The photos taken are stored in a digital archive from which the most intriguing, evocative images are selected at longer intervals and added to the existing series of ‘wavelength’ photos.

In presenting the photos – instead of isolating and emphasizing individual images – my main concern is the mutual contrasts and similarities between the individual images and the overall image of the installation as a continuous, dynamic stream of images within which constantly new spaces can arise for new visual cues, associations and ideas.

The photo installation can also be seen as a visual, photographic score that appeals to the musical imagination and invites and encourages the viewer to look in a playful, associative and ‘listening’ way, both within the context of the artwork and within their own daily environment. 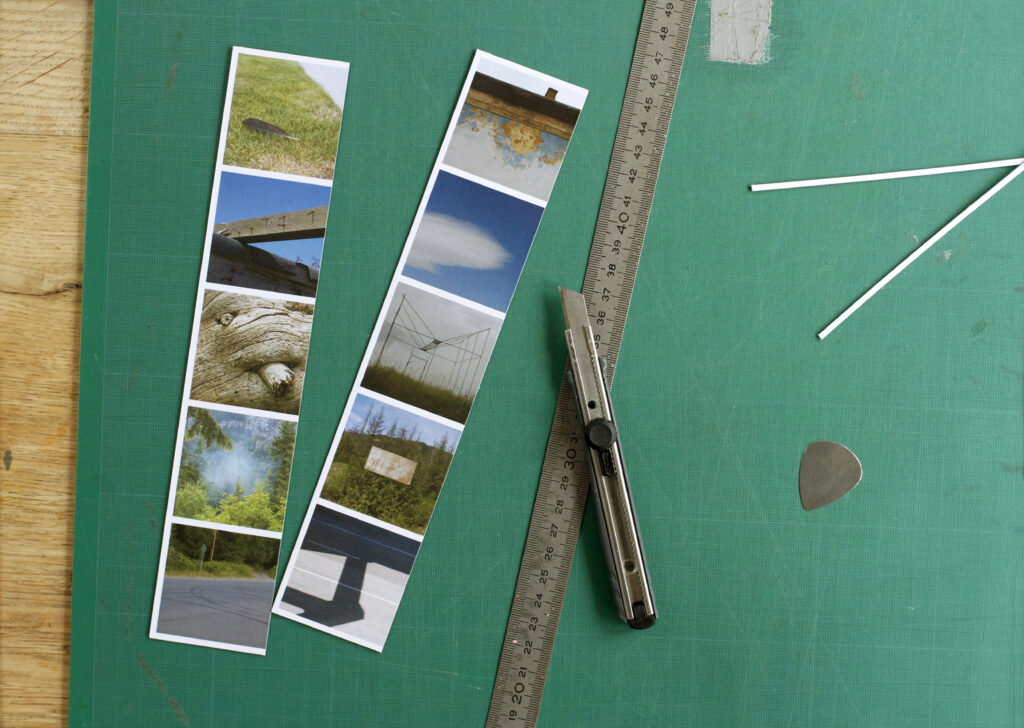 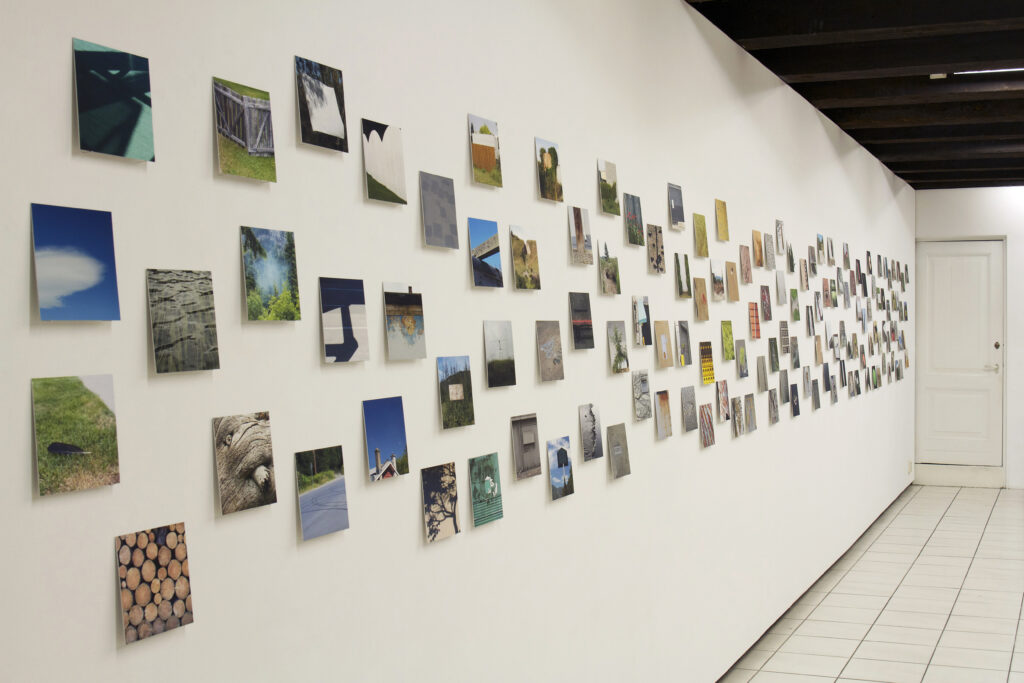 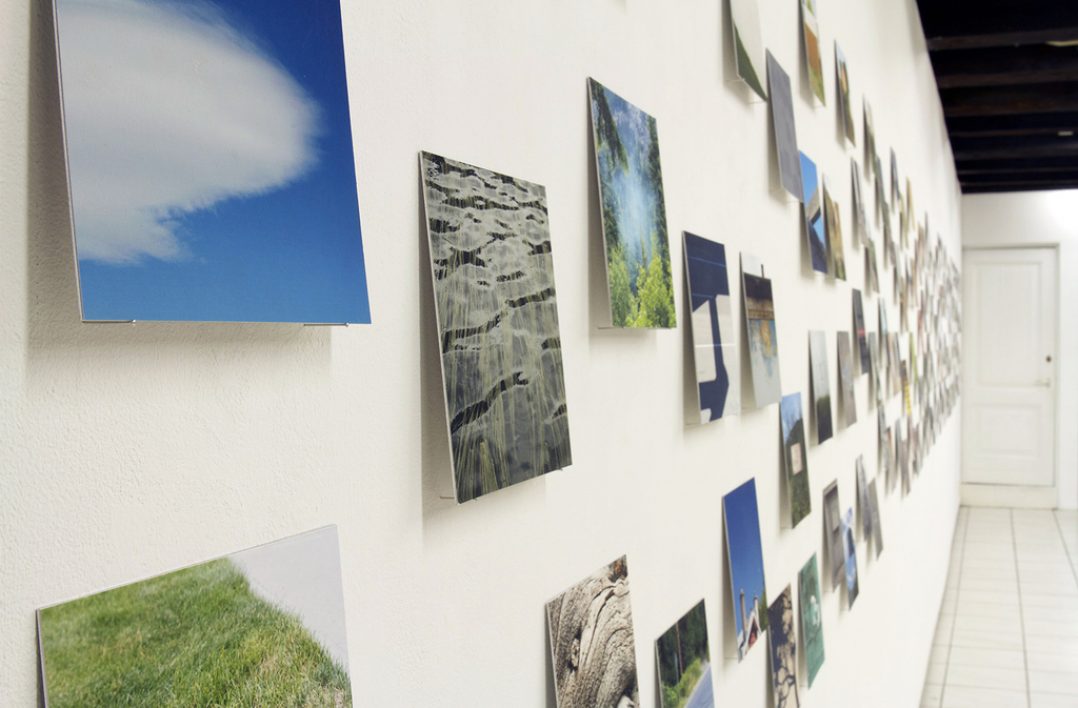 The connections photo-combinations is a series that was made prior to the ‘wavelength’ photo installation. The works consist of seperate combinations of closely juxtaposed photographs that form both formal and semi narrative connections. Within an intuitive and associative process of selecting, shifting and moving of photographs, unforeseen image combinations arise that can be experienced at different levels. The combined images create an open, visual questioning. 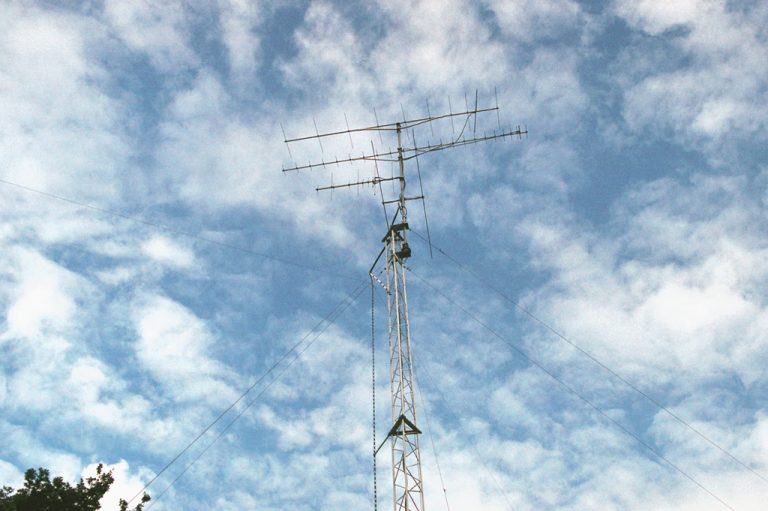 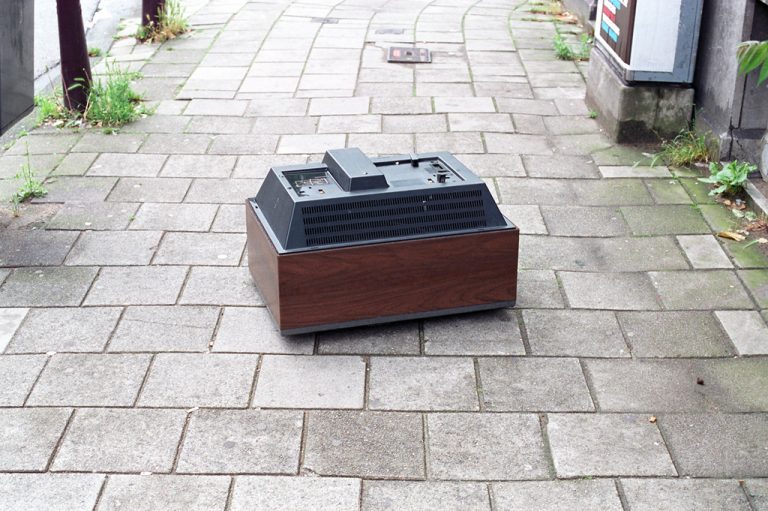 Mute Retune is a home studio project with experimental, guitar-oriented instrumental music. The compositions are built around short interlocking guitar riffs and can be characterized as repetitive, pulsating, syncopathic, layered and transparent. The mixed tracks are titled and linked to images from the photo archive.

Slow is an album with ‘lo-fi’ music, composed with virtual instruments and made with midi keyboard and second hand 486 PC. The CD is self-published in a screen-printed, numbered edition of 150 copies. (2002)

Field recording (since 2020) is complementary to my photographic work. The audio recordings are made with the same attention and in similar environments as where I photograph. They represent an auditory sense of place and are more evocative than documentary in character. In combination with photo images of recording locations and -objects, the field recordings form a synergistic connection between sonic and visual dimensions.

I use a stereo set of mini omni-directional microphones to record ambient sounds. These microphones pick up the sound evenly in all directions. Thanks to the (omni) recording pattern, they are very suitable for capturing entire sound environments, atmospheres and soundscapes.

The silently moved video-fragments are a selections from an ongoing collection of semi-abstract video ‘snapshots’ of which the audio track has been removed. The mute, moving images provide space for associations with the dynamics of inner mental processes.

The wavelength infinite ∞ text loop is both a tangible – printed on paper and presented as a graphic waveform – and a browser-based, swipeable text installation consisting of one long uninterrupted stream of words, loose thought fragments and associations without narrative. The text installation represents an non-verbal world of abstract thought, full of conceptual artistic clues. The browser-based text loop is regularly supplemented with new texts. 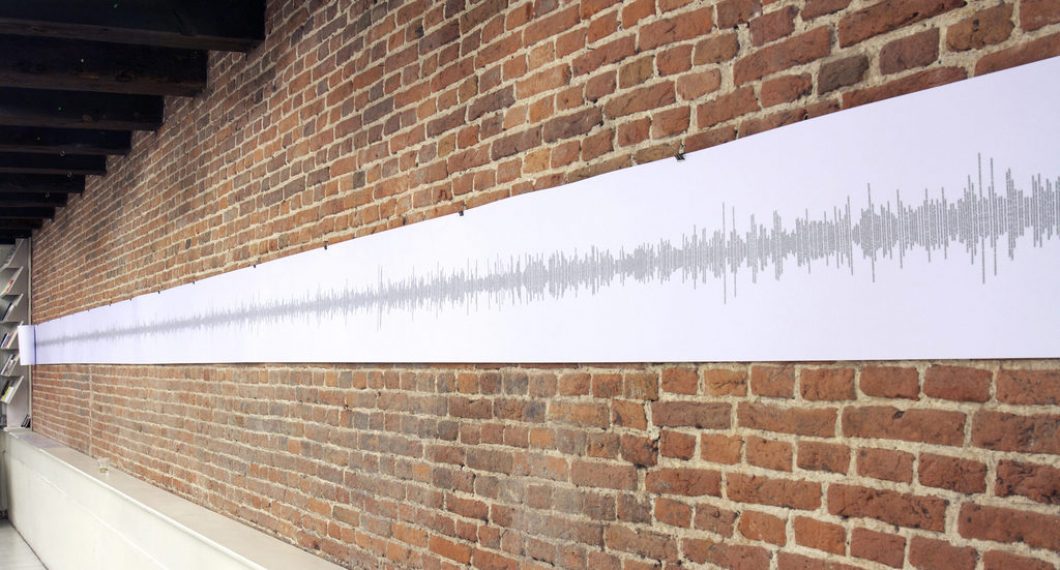 Intro is a series of 33 short autobiographical fiction texts, self-published in a self-bound, numbered edition of 75 copies (2000). 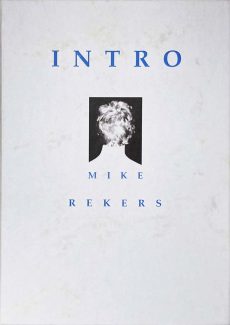